A guitalele (sometimes spelled guitarlele or guilele), also called a ukitar,[1] or kīkū,[2][3] is a guitar-ukulele hybrid, that is, "a 1/4 size" guitar, a cross between a classical guitar and a tenor or baritone ukulele.[4] The guitalele combines the portability of a ukulele, due to its small size, with the six single strings and resultant chord possibilities of a classical guitar. It may include a built-in microphone that permits playing the guitalele either as an acoustic guitar or connected to an amplifier. The guitalele is variously marketed (and used) as a travel guitar or children's guitar. It is essentially a modern iteration of the Quint guitar.[5]

A guitalele or guitarlele

A guitalele is the size of a ukulele, and is commonly played like a guitar transposed up to “A” (that is, up a 4th, or like a guitar with a capo on the fifth fret). This gives it tuning of ADGCEA, with the top four strings tuned like a low G ukulele.[6] This is the same as the tuning of the requinto guitar, although the latter are typically larger than a guitalele, and as the most common tuning for the guitarrón mexicano, albeit at a higher octave. 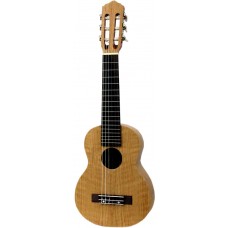 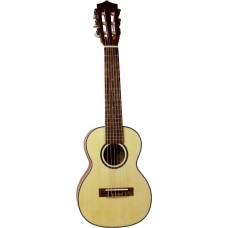 GR35059: Ashbury Guitalele, Natural FinishSpruce top with mahogany back and sides. Made in ChinaComp.. 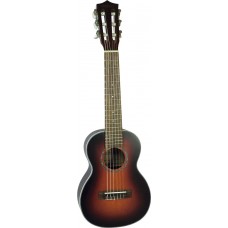 GR35059V: Ashbury Guitalele, Sunburst FinishSpruce top with mahogany back and sides. Made in ChinaCo..